This summer, I spent a week in Skopelos in Greece, known as the film location of Mamma Mia!. I went with my parents, which naturally meant taking advantage of not having to pay for anything. I’d soon convinced them to book an all-day Mamma Mia! island tour. Whilst my mum was excited by this prospect, it took the promise of a massive ice cream to convince my dad. The second we boarded the tour bus, which was packed with an assortment of enthusiastic and slightly sweaty tourists, I felt the first inkling of regret. It was 8:30am and ‘Dancing Queen’ was already blaring out of the speakers. I didn’t know it yet, but today would test my love of ABBA and Mamma Mia! to the limits. 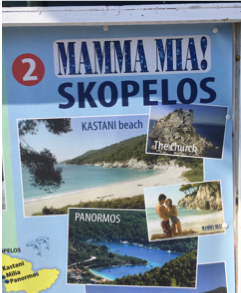 The first stop of the day was to the Agios Ioannis Chapel, which is the little white church used in the movie. After being told a tale about how Pierce Brosnan was literally chased around the island by every man, women and goat whilst filming, we braved the billowing wind and climbed the rocky 200 steps up to the chapel. The views from the top were stunning, and the chapel itself was very small and simple. Our tour guide, Christos, helpfully told me that it was only used for exterior shots, which made sense as it was only big enough to fit about four people in at once. 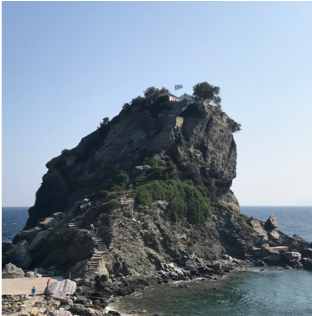 The other highlight of the tour was Kastani beach, which is where the ‘Lay All Your Love On Me’ scene was filmed. At the time of shooting, it was virtually untouched by human hands, and the set designers had to create their own jetty to put in the water. It took ten days to film, and camera equipment had to be brought in by boat, as the roads were rocky and unstable. Nowadays, the beach boasts sun loungers and a cheerful café to accommodate the tourists that flock to it. It’s still beautiful, with a thick forest at one side and clear water, but it’s sad to think that getting close to the rocks used in the iconic scene would mean clambering over gently grilling sunbathers. On the other hand, a café and an actual working road are certainly useful, not least for the local people.

After a few more beaches and a lot of ABBA later, it was time to head back to the main town. In a desperate attempt to play anything other than the Mamma Mia! soundtrack (now on its fifth loop), Christos put on some relaxing Greek music. Immediately, he was met with mutinous cries and with a sigh and a resigned shrug, he fired it back up. The all too familiar opening chords of ‘Honey Honey’ filled the bus, and people began singing along again. As my mum joined in, I wasn’t sure if I wanted to watch the movie or ever hear the soundtrack again as long as I lived.

Even if you’re not ABBA’s biggest fan, Skopelos still has a lot to offer you. It’s true that almost every hotel claims that the cast stayed there (our one offered photographic proof and a glowing recommendation from Meryl herself), but you won’t find the shops stuffed with Mamma Mia! fridge magnets. The waters around the island are a National Marine Park and conservation area, where dolphins and seals can be spotted, and there are many picturesque beaches to visit. My personal favourite was Saint Dimitrios beach on Alonissos, a tiny island near Skopelos, which was one of the most beautiful places that I’ve ever visited. It was a great place for snorkelling, and I’ve never swum in water so crystal clear. The beach only had a handful of visitors and it was truly idyllic. Saying that, my family will always remember it as the place where my mum lost her favourite straw hat. Like so many Greek islands, Skopelos is filled with cute stray cats looking for love (and food), which is always a bonus in my book. It’s a beautiful holiday spot if you’re lucky enough to be able to get there, and it’s well worth the ‘Money, Money, Money’!