Ruby Jones, a University of Exeter student, disabled writer and activist, tweeted last week about the ableism she suffered at Hijacked festival on Thursday 30 May. In the original tweet was four photos of an e-mail she sent to a person of authority in relation to the Hijacked events team with the caption  “my letter of complaint after having to deal with discrimination and medical neglect at Hijacked Festival yesterday – utterly appalled lengthy read but highlights the ableism i had to deal with #makefestivalsaccessible”. The photos she attached describe the incident: 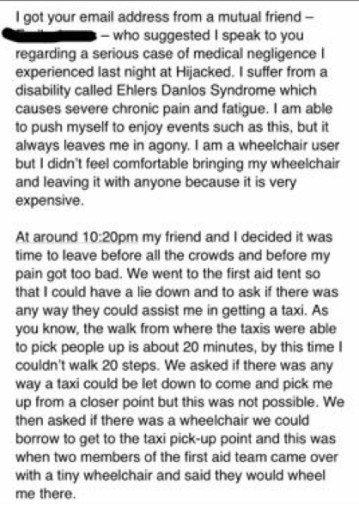 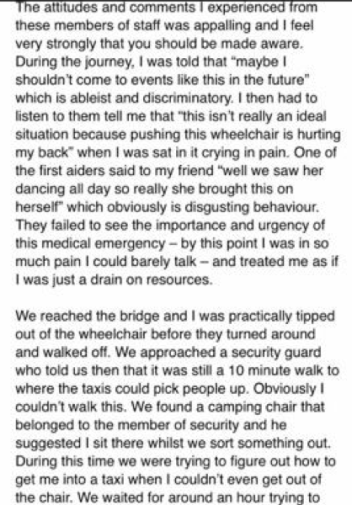 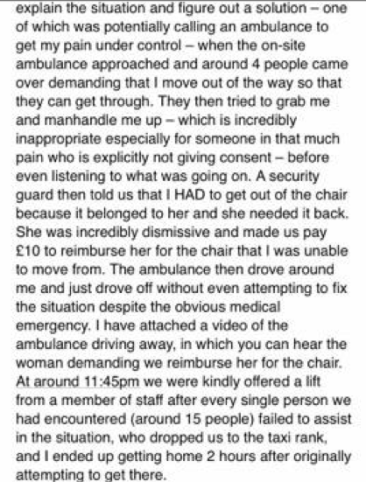 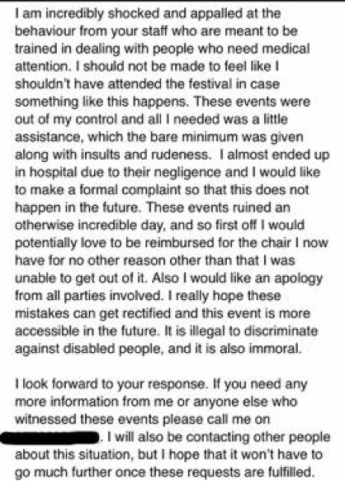 As of 9 June 2019, the tweet has been retweeted over one hundred times and liked over four hundred. Ruby Jones spoke to RAZZ about the incident, saying “I haven’t experienced behaviour like this for a long time. The blatant disregard and lack of urgency at what was a clear medical emergency was shocking. Usually at events like this there is at least a couple of people willing to help and listen, but the more we asked for help the more people kept ignoring us.”

The event team at Hijacked have responded to Ruby now and she says that they “have been amazing, they were devastated to hear what happened and not only have the staff in question been reprimanded, they have changed their accessibility possibilities, including purchasing a better wheelchair and putting plans in place for personal exit plans for people with disabilities.” While this incident should not have happened in the first place, it’s affirming that the Hijacked events team have had a proactive response and leads to hope for next year’s event.

Becky Olaniyi, a disability campaigner and youth mentor, spoke to RAZZ about how people with disabilities are currently prevented from attending events like concerts and festivals. She explained that a “major issue before we even get there is booking a ticket. For the majority of concert venues you have to book a wheelchair accessible space over the phone instead of online… Also, it is basically impossible to book with friends because accessible spaces are usually removed from the rest of the crowd.” Before even entering a space, people with disabilities are forced to go through the emotional, mental, and physical labour of trying to avoid future difficulty and ostracising.

Olaniyi also discussed the impact on someone’s mental health that restricted/no accessibility measures at events can cause, especially in regard to students and young people who need a healthy social life: “It can be very isolating having a disability at university because so many things are inaccessible and make it hard to socialize even on campus, so having the same issue outside of uni can really damage your mental health and self-perception. Repeated small occurrences like this pile up day after a day and can have a huge impact on your mental health. If a person can spend their money and time supporting an artist they should be able to see the artist live just like any other fan.” Student life is a trying time, having the world around you made inaccessible though is further stress on your health. Accessibility needs to be prioritised by those who organise events and manage spaces for students in order to make sure that no one’s health is negatively affected while pursuing an education.

The promised improvements to next year’s Hijacked festival have only happened thanks to Ruby Jones speaking out about what happened to her. It is someone’s personal choice whether they choose to discuss their experiences, but Jones has helped to instigate a conversation within the Exeter student community. Jones explained to RAZZ that her “hope for speaking out about this was not only to raise awareness about what disabled people have to face on a daily basis, but also to ensure that this event is accessible to everyone in the future.” If events and spaces targeted at students want to be accessible, then they need to listen to people with disabilities to ensure that they introduce the most effective measures. As Becky Olaniyi said, exclusion from events like Hijacked due to inaccessibility can have a profound effect on someone’s mental health that can lead to future reluctance to enter spaces. RAZZ are grateful to Ruby Jones though for pushing the conversation of student accessibility and inclusivity, and she has assured us that “I’m also not prepared to stop living my life because of the ignorant behaviour of a few people”.