A delightful, magical, and charming rendition of the timeless children’s book to warm every audience member’s heart this festive season.

When I went to see Quirk Theatre’s adaptation of Margery Williams’ classic children’s book, The Velveteen Rabbit, I must admit that I was dubious and had a few questions. In particular, how was this cast going to convey and embody the actions and emotions of a stuffed rabbit? However, Quirk Theatre quashed all my doubts and left me yearning to re-read the charming children’s book in order to re-live their heartwarming production of the story.

This production is a true adaptation of the poignant children’s book, with the young boy of the original replaced by Alice and her playroom filled with the toys of 2019. When Alice’s step-dad, Mike, gives her a Velveteen Rabbit for Christmas, it is snubbed by the mechanical and modern world of iPhones and LOL dolls, and stuffed under the bed. However, when Alice’s favourite toy goes missing, Alice and the Velveteen Rabbit go on a heart-warming and delightful adventure, discovering ‘what is real?’ and what it is to be loved. This startlingly modern adaptation definitely brought the story into a contemporary setting, whilst emphasising its timeless themes of love, imagination, and mortality. 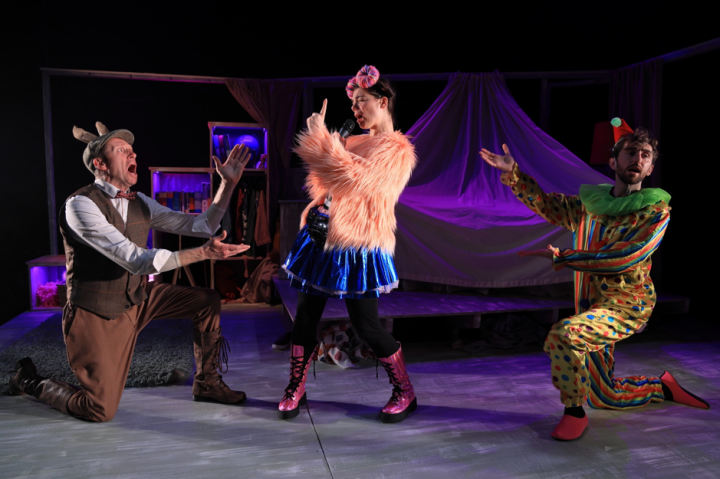 With its fast-paced story and short running time, this production is perfect for the family and first-time theatregoers. There is hilarity for all ages to enjoy, with fashionable, amusing jokes tailored to children, and hidden smart comedy which acts as a little secret between the cast and the adult audience member. With the universal theme of growing up at the heart of this show, its magic casts a spell over all ages.

I must commend the cast for their adaptability. This immensely talented quartet of actors convincingly portrayed an abundance of roles, embodying all their quirks and intricacies. The audience was left enthralled by their quick costume changes, high energy stage directions, and diverse acting range. They successfully portray the exuberant toys, depict the youthful child, and also fulfil more poignant, serious moments. From playing kazoos in harmony to re-enacting a toy’s fear of the washing machine, I left wondering if there is anything this cast could not do. I could (and would happily) congratulate every cast member individually for their talented portrayal of each character, but I would much rather celebrate their camaraderie. Through their seamlessly blended friendship on stage, it was easy to delve into the wonderful and charming mind of Alice and the world of toys. The cast truly transported the audience into the magical world of make-believe and imagination, where there are no limits.

The simplicity of the set was truly innovative and beautiful. The minimalist set and lighting deny the theatre completely of all its frills and superficiality. It is the perfect rendition of the idyllic Christmas home, allowing the audience to focus on the dynamic acting and the important, universal themes. In its simplicity, it completely trusts its audience to use their imaginations, play-act the story with the cast, and join them on the magical and enchanting journey of Alice and Rabbit.

My only criticism of this adaptation of the classic children’s book is that in remaining loyal to Williams’ plot-line, the ending is somewhat anti-climatic. Following the excitement of the adventures, trials, and tribulations of the playroom, the presence of a fairy who solves all of Rabbit’s issues seems rather out of place. However, this is saved by Christmas magic and it is truly enchanting when the toy rabbit becomes real. Also, the sentimental moment that is shared between Rabbit, Alice, and Mike at the end of the play solidifies their bond and highlights the magic that is shared between friends and family.

What Quirk Theatre established on stage is that this story still remains a timeless celebration of imagination and love. It has been skilfully adapted for both children and adults and it is the perfect way to get into the Christmas spirit. This production immerses its audience into child-like fantasies and echoes that ‘there’s wonderful magic in the world if you chose to believe it’.

Quirk Theatre’s production of ‘The Velveteen Rabbit’ will continue performing at Exeter Phoenix until 28th December.