Footlights tackles the musical version of the 1990 film Ghost at the Northcott Theatre. Due to stellar performances and innovative technological choices, the production warrants its four stars.

The show began with brief moments of discomfort. The adjustment to the North American accents had the disadvantage of tinting the romantic relationship between the leads Molly (Lucy Harris) and Sam (Harry Lynn) and the production with an initial cheesiness. The mics also cut out several times, meaning a slight apprehensive state for whether you would have to strain your ears to hear the punchlines or vital plot details.

This had the potential to threaten certain characters’ brief scene-stealing opportunities, including the two Hospital Ghosts (Matt Lawrence and Sacha Mulley). Luckily, the charming purgatory partnership had the vocal projection and physical performance to land every joke. This sequence was particularly impressive when considering how the actors had to interact in a practically horizontal line while a separating screen divided the stage between the ghost realm and the mock hospital behind. Projected heart rate monitor visuals onto the gauze added creative, technical nuance to the scene, enhancing the minimal, background gestures with the ensemble walking around in scrubs. This combination of superb musical performance, acting, stage setting, and technical ability was the first insight into how the show would go on to flourish. 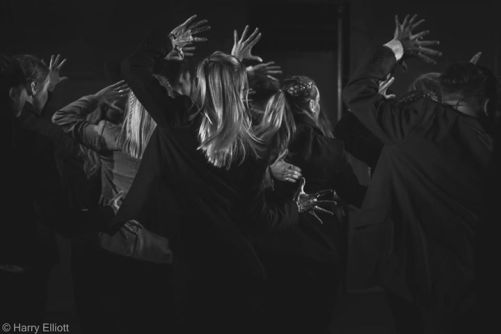 The Northcott Theatre presents its own issues as a very wide stage, overcome by the set design of tall scaffolding to host the live band on the left and create two levels for the actors to perform on. The ensemble had some tight squeezes to enter the stage in but, thanks to innovative choreography where the dancers hypnotised with interweaving dance lines, this proved negligible in mitigating the performance. The ensemble’s range in dance styles throughout the show also helped to continuously prevent a musical monotone. One group executed a street dance sequence that successfully unsettled the audience in the dealing with the afterlife, quickly followed by a fleeting tap dance entrance to smoothly transition between narrative themes.

The restrictive space also proved less of an issue due to the fantastic visuals projected onto the gauze and stage. I have never seen this technical aspect made such a prominent and vital feature of a student production before and I hope that I get to see more of it. Whereas the set design and ensemble costumes could only go so far to gesture towards a change in location and thematic tone, the projections filled in the audience. New York City establishing shots, enlarged computer type, and tube station settings all contributed to creating an ever-adapting yet all-engulfing scape for the stage that provided necessary contexts for the actors to flourish.

And the actors did flourish. Molly’s teasing with Sam was delivered with an endearing, throwaway nonchalance that meant the audience could grow an early affection for her that wasn’t simply born out of later pity for her grief. Carl (Tom Dean) also achieved being an utter creep and I only wish that there was more build-up where tension was drawn out longer before Molly slapped him. Sam also managed to gracefully complete his role as the thread that carried us through the show and introduced us to the surrounding characters without overshadowing any of them. 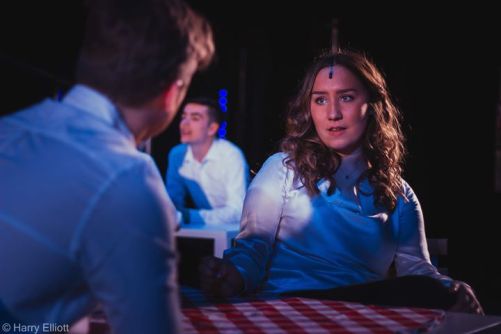 However, there is one performance that triumphed. Chad St Louis as psychic Oda Mae was phenomenal. I’ve had the privilege of seeing St Louis sing before at Soulchoir gigs, but if you haven’t heard him sing before, then you need to see this show just to witness his immense vocal talents. It’s a no-brainer why he was cast in this role when songs such as ‘Are You A Believer?’ and ‘I’m Outta Here’ required incredible singing prowess. Aside from the voice though, his comic delivery was amazing. My shoulders tensed as I saw St Louis first strut onto the stage in drag, fearful that Whoopi Goldberg’s original humour in the film would be reduced to the ill-taste of relying on just laughing at a man dressed in drag. But the drag simply articulated Oda Mae’s flamboyance and it was the impeccable timing and delivery that invoked the loudest roars of laughter – and just to tease you: Oda Mae’s handiwork with a feather boa literally made me shriek.

Nevertheless, the show didn’t suffer from Oda Mae being the star that outshone the rest. Molly had the daunting task of following the bombshell’s performance of ‘Are You A Believer?’ and managed to compete through heavenly vocals in an extremely opposite emotive tone, made more beautiful by an accompanying ballet performance and the tender detail of ominously hanging shirts. The production’s details helped to consolidate the show’s excellence at nuance such as lighting used to gesture towards a grave and bright light flashes for seamless transitions into body double tricks (although I think we could have done with slightly less smoke, I understand the effect but I could not see at some points). It was the correct decision by the creative team to excel in sometimes side-lined elements as it avoided the tackiness that the original film could foster in a musical version. The appreciative nods towards ‘Unchained Melody’ and the famous Patrick Swayze and Demi Moore pottery scene proved more satisfying than opting for replica versions of the well-known pop culture moments that would have come across as most likely tacky and cringey. 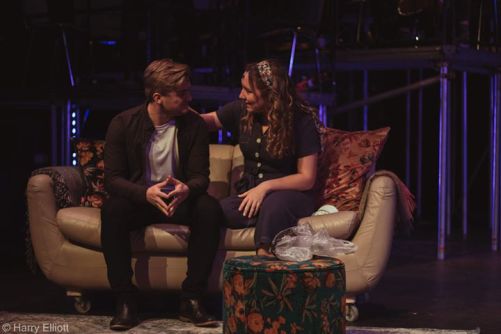 Once tech issues had settled and the surrounding cast had mellowed the cheesy image of the picture-perfect couple, this show proved thoroughly enjoyable and hit the emotive notes it needed to. The musical performance of both the band and singers was far from amateur and it was refreshing to see lighting and projection lead a student production. ‘Ghost the Musical’ showcased just how delightful student theatre can be.

‘Ghost the Musical’ is showing @ the Northcott until Saturday 25 January.