Despite having only released their first single in February of 2019, Working Men’s Club have already built a loyal following which is growing by the day. Their sound echoes the post-punk movement with a techno twist, which meant I was instantly hooked after my first listen. With such an interesting sound, I’ve been very excited to see how it transfers to a live performance, and I definitely wasn’t disappointed.

Supporting Working Men’s Club was Lazarus Kane. I’d heard a little bit about him before; he’s been billed for a few festivals this summer as the hype around him is building. Having only released one single, which had distinct Talking Heads vibes, I was intrigued to find out more. When he walked onto the stage in a kimono and sunglasses, I was even more intrigued.

Despite the small crowd, Lazarus and his entourage of five other band members were determined to put on an energetic performance. Their energy transferred to the crowd with Lazarus inviting us to move closer to the stage. The vibe of their sound and dance moves got the crowd grooving too. With six members onstage, there was a lot going on: synths, drum machines, bass, keys, guitars, backing vocals. Somehow they achieved a perfect balance, producing a rock and electronic marriage. Definitely one for Talking Heads fans. It left me feeling so much joy, I will be seeking out an opportunity to see Lazarus Kane again.

By 9pm energy levels had been raised, and the crowd was growing, filling the small floor of The Cavern. The band entered the stage to the sound of The Champs’ ‘Tequila’ and cheers from the front row. Opening with an unreleased track was arguably a risky move, but it invited intrigue for those who didn’t know much about Working Men’s Club, and excitement for fans who have been awaiting new music from the band who have only released four songs to date. The track showcased the darker, heavier side to Working Men’s Club. This then transitioned into their first single ‘Bad Blood’, which has a more peppy synth sound, showcasing the range of their sound straight off the bat. 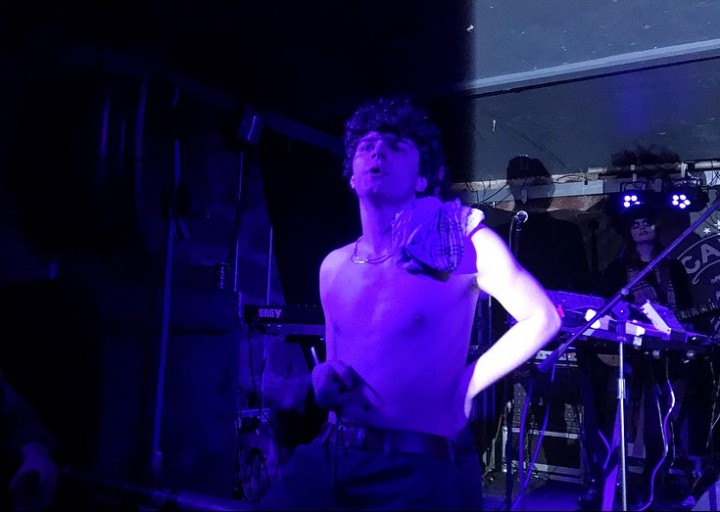 Frontman Syd Minsky-Sargeant was settling into the performance and the crowd was beginning to loosen up a bit too. Having seen videos of the band’s performances before, I was expecting a rowdy crowd, but it was more to the contrary. The crowd didn’t really loosen up much more past the second song despite the high energy of the performance, which was a shame. By the third song, Syd had removed his top and jumped into the crowd, showcasing his brilliant presence as a frontman. Throughout the performance he was between the stage and dancing through the crowd, standing on the barriers with his head pressed to the ceiling in between the two.

Unfortunately, mid-way through the set he jumped back onstage and paused the track to shout, “I don’t care if you’re a man or a woman, don’t grope me”. Immediately the atmosphere became uncomfortable, knowing that someone had made him feel horrifically violated. He continued with the set, but it was a stark reminder of the kind of unacceptable behaviour that can happen at gigs. Props to Syd for carrying on despite it.

The rest of their performance maintained high energy. Several new songs emphasised the heavier side of their style, and the considerable use of synths and the drum machine, accompanied by Syd’s intense vocals, made their performance entrancing. I’m very excited for the songs to be released, and to see the direction their sound takes. They closed the show with their most popular track, ‘Teeth’. I had high hopes for this one, and it was everything I wanted and more. The sound was big, and so was Syd’s intensity in the crowd. Wrapped in the microphone wire, screaming, “in your teeth, in your teeth, in your teeth”, it was a brilliant closing to the show. If the setting had been better, then I know the crowd would have been fully into it.

I managed to chat to Liam Ogburn and Rob Graham after the show, who were both lovely. It looks to be a good summer for the band. I asked them what festivals they would be at and Green Man and Glastonbury are on the bill amongst some smaller ones. They are definitely worth seeing live, so if they’re at your festival this year, make sure to catch their set.