Last Friday night I went to the RAMM for just the second time since I’ve lived in Exeter. As an English student and exhibition lover, I find it strange that there is such a valuable resource in the centre of town that I have never used. The RAMM Lates event highlighted the fact that the RAMM is a great resource that has real relevance to the student community. Museums allow us to experience culture up close and without the filter of computer screens that we have become accustomed to. After learning about Native American culture and history last term I found it eye-opening to be able to see firsthand a collection of authentic artefacts – such as traditional clothing and weapons – from Native American culture. So surely this is a resource we should all be using more often?

I arrived at the RAMM Lates event not knowing what to expect from the student night. I knew that it would be a look at the museum exhibitions at night. But, that was pretty much all I knew. On entry, what I found was a DJ playing house music, disco lit rooms and a bar. Towards the beginning of the night, there was an eerie feel in the empty museum and as I looked around I noticed that most of the crowd was made up of academic-looking, older adults. However, as the activities began, more students gradually appeared.

Throughout the night there were a variety of events that ranged from traditional Scottish dancing (Ceilidh) to guided meditation sessions. The Ceilidh looked like a lot of fun and was very entertaining to watch! However, the standout event for my friend and I was the performance by singer-songwriter Daisy Hill. Accompanied by her own guitar and a backing guitarist, her warbling voice filled the dark exhibition rooms and provided a sense of calm amongst the liveliness of the other activities. Sitting and listening to her play offered a welcome escape from the stress of deadlines into a relaxing world. Additionally, there were talks by the curators throughout the night about the history of Exeter and the current lace exhibition. These were interesting, although the curators could have further engaged the student audience by interacting more and perhaps making the subject of the talks broader. 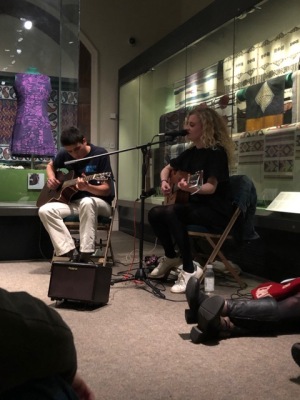 From a student perspective, the night was enjoyable and affordable with tickets priced at only £3. The evening ran smoothly with a clear timetable of events and a useful map alongside it.  However, I still felt that the RAMM didn’t target students as well as they could have since there was no clear theme tying the night together and the activities seemed as though they were aimed at an older audience than students. Perhaps a theme surrounding current world issues such as the environment or gender inequality could have improved this. Most of the activities were interactive and engaging, such as the craft table where those in attendance could make friendship bracelets. But, it would have been nice for the artefacts in the exhibits to have had more relevance to the night and an overarching theme linking to student life would have improved the flow.

It was nice to see the student community getting involved through performances by URBN Dance Society. Throughout the night they performed several times to pop/R&B songs which really helped to create a high energy atmosphere and lift the event. Also, the fact that one of the dances was in high heels was very impressive and empowering! In the future it would be great to see RAMM Lates become a termly event, run with a different theme each time. In order to do this successfully, involving university societies in more of the events would encourage students to come and engage with the activities.

Moving forward, the RAMM should certainly continue these events targeted at students to raise awareness of its importance in student culture. Especially due to the museum being the birthplace of Exeter University! The RAMM is the largest museum and art gallery in Exeter, housing over one million objects. Therefore, it has a great influence within the city’s local arts and culture scene. As students, we are lucky to have this resource on our doorstep so we need to start using it as a resource to further our degrees and enrich our education.

As a South Londoner living in Exeter, the biggest difference I have found in my life is the lack of culture from museums and art galleries. Exeter has enough shops and cute cafes to fulfil anyone’s wishes. But, at home, my friendship group’s ideal day out was always a trip to wander round the Tate Modern or mess around in the Science Museum. Museums are usually free so they are always the best option for a cheap day out! I think the RAMM hosting more relevant exhibitions and events would add another dimension to the student community and provide our social lives with a wider range of events to get involved with.

Despite turning up to the event clueless about what the night would hold, I left having had a unique experience that engaged my inner museum buff. I would definitely encourage other students to go to RAMM Lates in the future, and start getting involved with the museum so that it grows its bond with the University once again.