A thrilling story of love, loss and growth is brought to life on the Northcott stage.

WARNING – Strobe lights used throughout, so if you go and see this play, which I urge you to, beware of this.

Prior to seeing the play, I considered myself superficially familiar with the intentionally messy and complicated plot, due to the smash hit film. Quick refresher – Susie Salmon is a fourteen-year-old girl in early 70s Pennsylvania who gets violently taken from this world and then observes from her personal heaven how her friends and family deal with loss, grief and moving on. Susie is forced to see her killer not face justice, her parents’ marriage fall apart, her first love catching feelings for others and her sister potentially facing the same fate as she did. She is frustrated but not entirely helpless.

As the audience makes their way into the auditorium they are greeted by a 70s soundtrack, a stage encompassed by dirt and a towering mirror on the back wall, angled towards the floor. The mirror is an integral part of the staging, a wickedly clever tool delivering genius imagery throughout and serving also as a tool for storytelling. Strobe effects act as a blackout to signal the start of this fast-paced and both emotion and action packed performance. 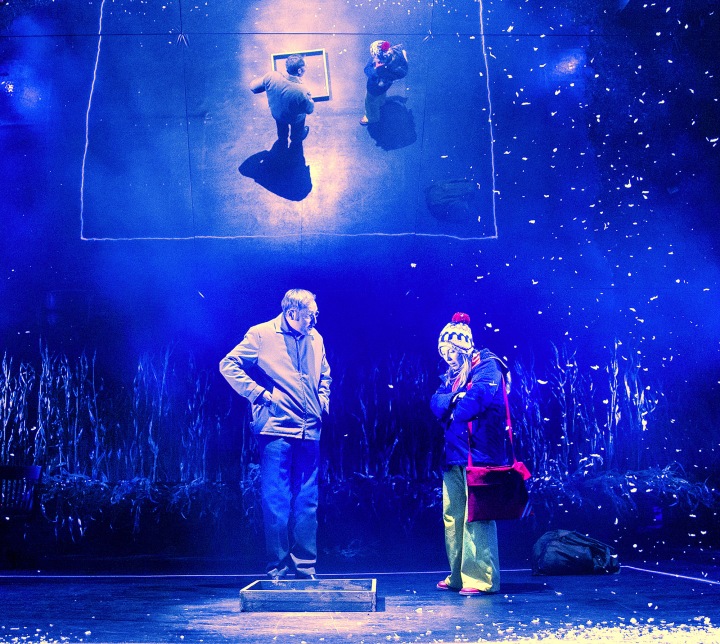 I was not expecting such a fast pace, and this doesn’t drop once throughout the show. The action is elevated through chorus work, physical symbolic movement and a soundscape which helps to paint the scene. Some highlights include a clever representation of a chase through the cornfield, a tribute to David Bowie and a touching duet suspended in the in-between space. It is difficult to name a stand-alone moment in such a tight and well-produced show.

The acting is faultless. American accents are strong and believable, the physicality of the characters is evidently explored and chorus work is polished. Charlotte Beaumont leads the cast as a captivating Susie, delivering a stellar performance. The character has to navigate a series of clear binaries throughout the show: this world and the next, innocence and coming-of-age, love and anger. This is a tall order but Beaumont consistently delivers, acting as a guide through the show.

Nicholas Khan dazzles as the deranged and driven serial killer Harvey. Jack Sandle evokes sympathy as a grieving father struggling to move on, and Atrin Aaron challenges the audience’s expectations of the typical behaviour of a bereaved mother. Leigh Lothian is an emotional Ruth with the voice of an angel. A special mention must go to Samuel Gosrani in the dual role of Susie’s first love Ray and the family dog Holiday, stealing the audience’s collective heart.

The list of this co-production’s collaborating institutions reads like a summary of all theatre companies in the Midlands and the North: Birmingham Rep Theatre, Royal & Derngate Northampton, Northern Stage (Newcastle) and Liverpool Everyman & Playhouse. However, so many cooks most definitely don’t spoil the delicious broth that is this production. This is due, in the most part, to the clear and effective direction by Melly Still. Still has a history of directing book-to-theatre adaptations, such as Coram Boy by Jamila Gavin (Still was nominated for a Tony and an Olivier for her direction) and Nation by Terry Pratchett, among others, and it’s no surprise that the production benefits from such an experienced director who also has an equally impressive record of design work.

The Lovely Bones play comes to us in a time when we are observing a rapid growth in a certain type of adaptation: book to film and then to stage. A recent production of The Girl on the Train, starring Samantha Womack, is an example of this. This trend relies on bringing in audiences familiar with the material, increasing its chances of financial success. It is fair to say that this production doesn’t shy away from its film counterpart, leaning heavily into the look and feel of the hit film. However, the original material, the book itself, with is ethereal themes and gripping storytelling, seems undeniably well suited for stage adaptation. This production explores ideas present in the novel in an extremely visually successful way. The theatrical tools are used skilfully to a deeply moving and satisfying effect.

The show runs until this Saturday, the 5th October, so you better hurry and see it before it continues its tour for the next few months across the country.